Overview of the Joint Development
In November 2020, Konica Minolta and NEC started to work on joint development for promoting 5G-based digital transformation (DX) at the IGOC which has a private 5G environment that enables large-capacity and low-latency communication. 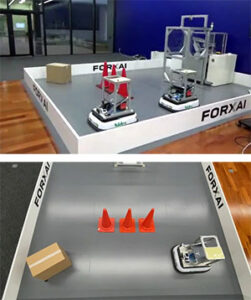 The two companies have jointly developed a highly efficient automatic control system for AGVs (“the system”), which can detect obstacles from a remote location and reduce the detour distance by using Konica Minolta’s imaging AI and NEC’s multi-robot controller (MRC), which is traffic control software for autonomous mobile robots.

The system detects obstacles several meters away based on images captured by a camera mounted on an AGV by using an object detection algorithm, which is part of Konica Minolta’s “FORXAI Imaging AI” technology lineup for AI processing. This enables AGVs to detour more efficiently than with a general control system that uses laser radar sensors. The camera mounted on an AGV secures the field of vision in the traveling direction, eliminating blind spots, which are a problem when stationary cameras are used, and achieving safer driving.

The two companies aim to attain safe automatic operation control using large-capacity and low-latency communication, even when hundreds of AGVs are operating at the same time, as is expected in the “Future Factory” initiative, by ensuring integrated control of many AGVs with MRC in a private 5G environment.

Overview of the “Future Factory” Initiative
The “Future Factory” initiative represents Konica Minolta’s future vision of production to be achieved by 2030. It aims to create factories which are capable of manufacturing diverse products using common industrial robots for each process and are characterized by sophisticated automation of the transfer of goods between processes. The goal is to achieve “a safe and secure factory where people work in harmony with machinery” and “an autonomous digital job shop that allows diverse products to be produced in smaller quantities.”

1. A safe and secure factory where people work in harmony with machinery

In line with the evolution of AI and IoT, workplaces and production sites where people work with machinery have been expanding rapidly. One of the challenges in the “Future Factory” initiative is to create an environment where people can work more safely at production sites.

The newly developed highly efficient automatic control system for AGVs can detect obstacles and people located at a distance from an AGV. This enables detour routes to be controlled more efficiently while avoiding the risk of AGVs colliding with people, thus contributing to building a safe and secure on-site environment.

2. An autonomous digital job shop that allows diverse products to be produced in smaller quantities

Recently, production sites are being customized to meet diversifying user needs. The concept of “manufacturing the required products in the required quantities at appropriate locations” has been widely accepted due to growing environmental awareness. As a result, diverse products need to be produced in smaller quantities at multiple locations.

Under the “Future Factory” initiative, technology development is underway to realize a digital job shop where the movement of industrial robots is controlled on a production line and is changed autonomously in response to product changeover for producing diverse products. NEC’s multi-robot controller (MRC) enables integrated control and centralized management of various robots. MRC solves potential issues when using AGVs and other autonomous mobile robots, such as management difficulties due to different systems used for each robot and the inability to flexibly cope with changes in the on-site environment and fluctuations in logistics. MRC helps make manufacturing sites more productive by improving the operational efficiency of multiple autonomous mobile robots and linking with the business system.

The two companies are committed to enhancing their respective strengths by using mutual technologies and assets to increase the value proposition to customers and create more synergies through collaboration.